I was lucky to have recently been awarded the Valerie Earley prize for a two week residency at the Tyrone Guthrie Centre. The award was created by friends and colleagues of Valerie Earley at Visual Artists Ireland who wanted to provide a lasting memory of Valerie.

During the two week period I was given Studio 4, the Print Studio, to use. This is a great space to work in, with a double height ceiling, loads of natural light, ample room to spread paper and three presses to choose from. There is a large etching press and a smaller relief press, but the press I was most interested in was the Albion Press. This large beastie has been recently reconditioned and moved into Studio 4. I call it a beast, because it is solidly built of iron and certainly larger than any press I have used to print my wood engravings. This particular press was made by a company called Hopkinson and Cope and is titled the Improved Albion Iron Press and probably dates from the mid-nineteenth century. The press has been beautifully restored and stands proudly in red, black and gold paintwork. The press was made in Finsbury in London and I affectionately called the press Finn in honour of its birthplace but also after the mythical giant Finn McCool to recognise the power of this press. Quite a lot has been written about the Albion press over the years and individual models can be tracked through their serial numbers.

“The Albion is a legendary machine - more for its clever function, ability, and design than its beauty”

states the website of the printing museum rather unfairly as I think this press is a beauty and I was really pleased to hear that it had been installed in the Print Studio.

I am a printmaker specialising in wood engraving and I use lemon wood and box wood blocks to create my images. The blocks are generally quite small in size, normally about 10cm by 10cm, and so it was with trepidation that I placed an inked block on the bed of the press with a covering of paper. The block looked so small and I was concerned that the detail of the image would be crushed when I used the lever to lower the full pressure of the platen onto the surface of the inked block. The resultant printed image on the paper was actually quite ghostly in appearance with very little of the ink being transferred to the paper. So I had to make adjustments, raising the lemon wood block by adding a thin board below it on the press bed. I printed a few more trial prints and finally was able to get a good impression of ink transferred from the wooden block to the paper. Too much pressure from the platen on the wooden block surface and the image is embossed onto the paper and detail lost, too little pressure and the ink is not taken up onto the paper. I have been told that one wants the press to “kiss” the surface of the wooden block to get the right image transfer. Trial and error and a little time spent getting used to the press paid off and I was able to print off some really good images.

I really enjoyed my time in the studio and was privileged to use this piece of working history. I was honoured to have been awarded this residency and thank the people who created this opportunity and in particular, during my stay, I remembered Valerie Earley and the legacy that has been created in her memory. 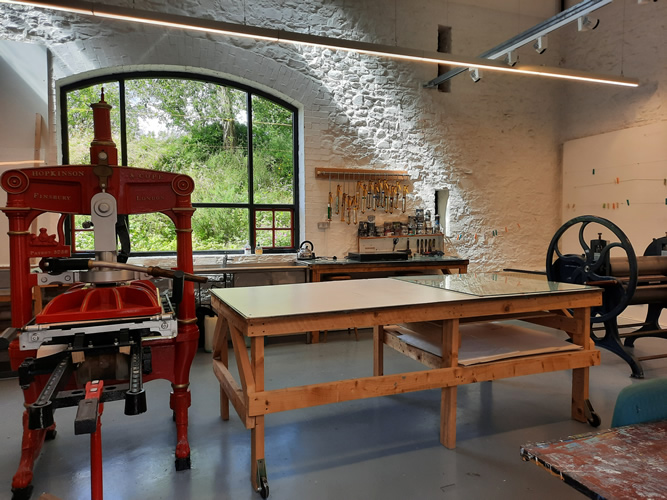