Guthrie as Theatre Director in Ireland, England, and America

As a theatre maker Sir William Tyrone Guthrie was one of the great originators, redefining the open stage.

Among British Theatre Directors Tyrone Guthrie was one of the great originators; a true ‘enfant terrible’ of British theatre in the thirties and forties and, standing six foot four in his socks, quite the tallest enfant terrible to be found in the English-speaking world. Guthrie’s work in London before and during the Second World War included productions with John Gielgud, Orson Wells, Vivien Leigh, Laurence Olivier and Alec Guinness. He had a profound effect on directors such as Peter Brook and Peter Hall. He blazed a trail for subsidised theatre in the Sixties and his views on theatre could be readily adapted to all the arts.

The range of Tyrone Guthrie’s achievement in opera and drama is formidable; ninety-six productions, not including those he did for the Scottish National Players and the Cambridge Festival Theatre between 1926 and 1930, together with several works for radio (BBC). He also wrote a handful of plays and books.

‘Among the great originators in British Theatre... [he] was a towering figure in every sense. He blazed a trail for the subsidised theatre of the Sixties. He showed how to run a company and administer a theatre and he was a brilliant and at times great director...’

Guthrie started theatres all over the world. The founding Artistic Director of the Stratford Shakespearean Festival of Canada, he also added to the flourishing American regional theatre movement with his work at Minneapolis founding the Guthrie Theater, which became a prototype for an important new kind of theater in America. Perhaps his greatest achievement was to reinvent the open stage.

Guthrie never referred to his knighthood, which came very late in life. There was an innate humility about him and he always hoped to find a shadow of it in others. 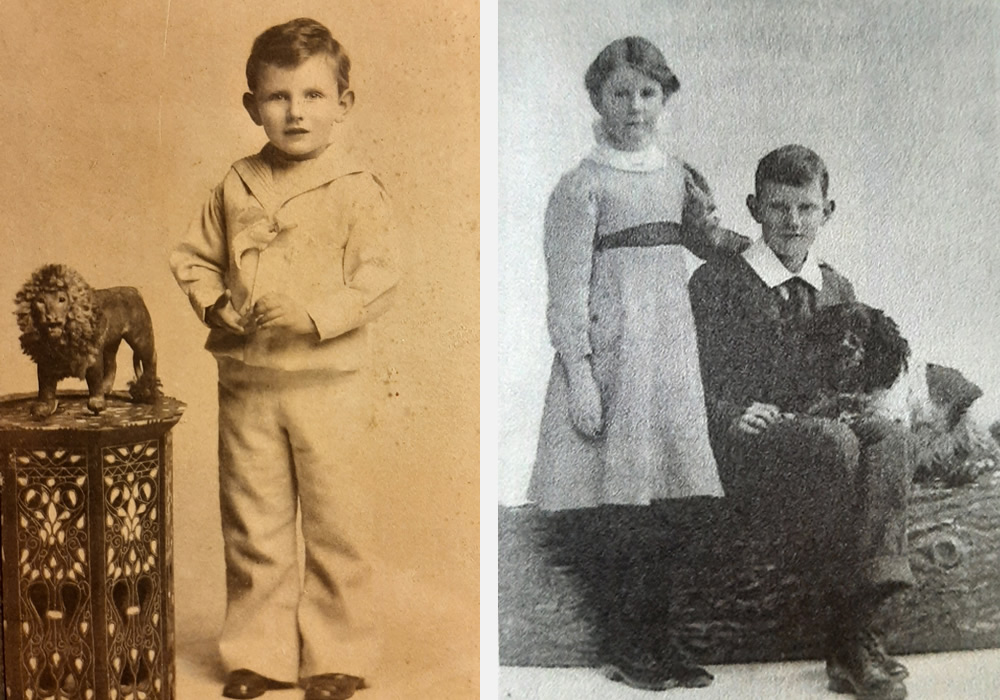 Tyrone Guthrie as a child, on left, and with his sister a few years later on right

Sir Tyrone Guthrie (1900-1971) was the most admired and innovative theatre director in the English-speaking world in the mid 20th century. His Ulster forebears were on his mother’s side: she was a Miss Noragh Power, her father Sir William Tyrone Power having married a Miss Martha Moorehead of Annaghmakerrig; Martha inherited the property from her parents, on her death passing it on to Noragh. Guthrie’s father’s family was Scots.

Tyrone Guthrie’s earliest job after graduating in 1925 was as the earliest announcer and studio assistant at the BBC in Belfast. He introduced radio drama to the Belfast studios before the other regions took it up, becoming a skilled drama director whose work was uniquely rebroadcast from London. Throughout his life he constantly returned to Belfast from abroad to direct radio plays, to give radio talks and to produce or direct in the theatre, particularly for the Ulster Group Theatre and the Ulster Theatre Company. He produced Northern Ireland’s theatrical contributions to the Festival of Britain in 1950, introducing Ulster actors such as Elizabeth Begley, J.G.Devlin, Harold Goldblatt, James Mageeon, Joseph Tomelty, etc, to the London scene and to television. He directed several productions at the Grand Opera House, Belfast, bringing the Sadlers Wells Opera Company there for three weeks in 1945 for its only visit ever, to celebrate Northern Ireland’s part in WW2. It was a source of some astonishment to his colleagues that he often ‘fitted in’ adjudications at provincial Drama Festivals – several times in Ballymoney – simply because he liked the genuine atmosphere and the absence of pretentiousness after stints in New York or Sydney or London. He was adjudicator at the Ulster Drama Finals in the Grand Opera House in 1953. In 1961 he was awarded a knighthood ‘for services to the theatre’. He was elected Chancellor of Queen’s University, Belfast, by vote of the students and academic staff, in 1963. He had the honour of conducting H.M.Queen Elizabeth II on a tour of new university buildings in 1966.

Much has been written about the visionary theatre maker William Tyrone Guthrie, who was knighted in 1961. His original approach to both Shakespearean and modern drama greatly influenced the 20th-century revival of interest in traditional theatre in Great Britain and America. On this page we attempt to gather writings about Tyrone Guthrie, the history of his family and the history of the estate. If you have others to add please get in touch

Tyrone Guthrie was an excellent writer and many of his theatre writings are still available. A selection of these is presented below with links to amazon.co.uk for information purposes. Amazon listings include IBAN numbers for ease of searching other catalogues.

If you want to read more about Tyrone Guthrie there is also an authorized biography from 1976 written by James Forsyth.